Exemple de projet
Even dipping your toes makes a ripple!
Making a difference in the world is a huge challenge, but all it takes is one first step.
Theme: Achievement 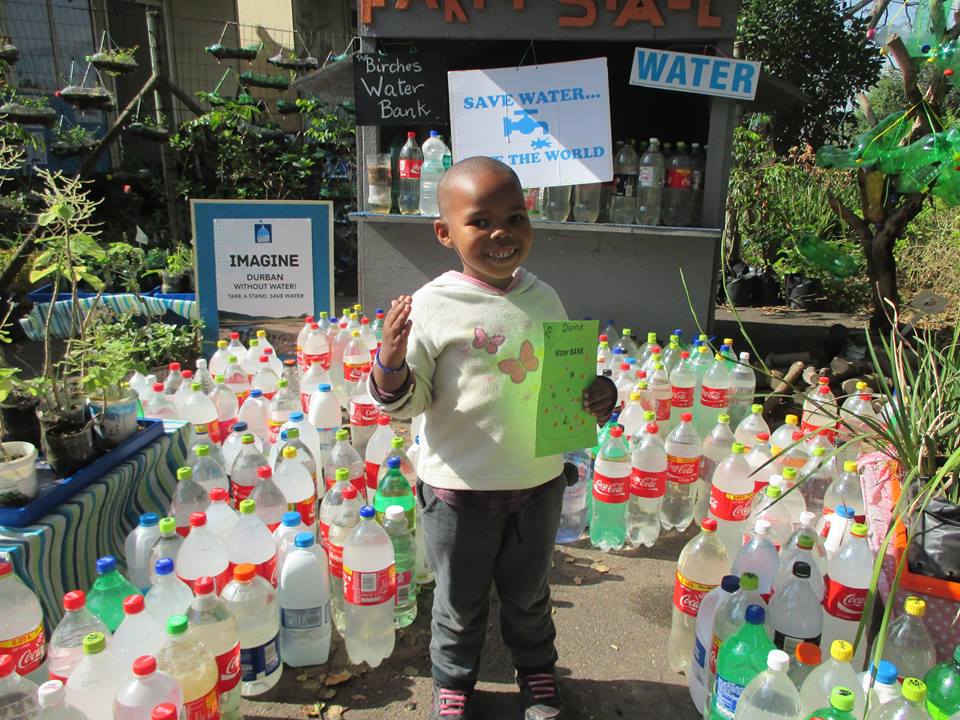 Making a difference in the world is a huge challenge, but all it takes is one first step.

Our Water Explorer schools have been doing just that. Demonstrating how simple actions add up to doing their bit for water-saving and the environment.

The Birches in South Africa, were aware of the water scarcity in their country and developed an ingenious idea of starting a Water Bank to save and reuse water which otherwise would have gone down the drain. The team started collecting grey and rainwater in plastic bottles, establishing their very own water bank!

They used (water) bank cards to track each person and how much water they’d saved, and after saving 40 litres of water, the children that had saved 40 litres were awarded blue beaded bracelets. All the water saved is used for flushing toilets, and providing water for the Sunny Spot Nursery vegetable garden which is run by the pupils. This most simple and easy scheme has had a great response.  The Birches got families to think about how much water they consumed, and how they could be reusing it. Small actions from little people showing the way!

Przedszkolny w Godowie at Zespół Szkolno in Poland had been eager to establish a vegetable garden for a while, and the Water Explorer’s Grow It Yourself Challenge was the perfect opportunity. Built close to the main entrance of the school, the garden was a great place to be noticed and have an impact. Having been hard at work digging, seeds were planted and the soil watered. Digging and planting seeds sounds like a great way to spend some time with schoolmates! A vegetable patch will keep on giving, year after year, for people to enjoy fresh vegetables with the satisfaction that they were grown by themselves.

And once you’ve made a first step, finding others to join in becomes an exciting prospect. Felsted Preparatory School in the UK had the privilege of working with a school in India. Felsted and Indaprastha School met through the Connecting Classrooms project run by the British Council. Water Explorer was a great common interest for the two schools to bond over.

Children from Indaprastha School made water pledges to save water in their school and communities and completed the Freshwater Watch Water Explorer Challenge that tests the quality of the water in their local community. Using Skype to share thoughts and ideas on the water projects has been an excellent way to develop a deeper understanding of the issues of clean water in both India and England as well as growing relationships between the children in our two countries.

With just some small steps, our Water Explorers have made waves of change.